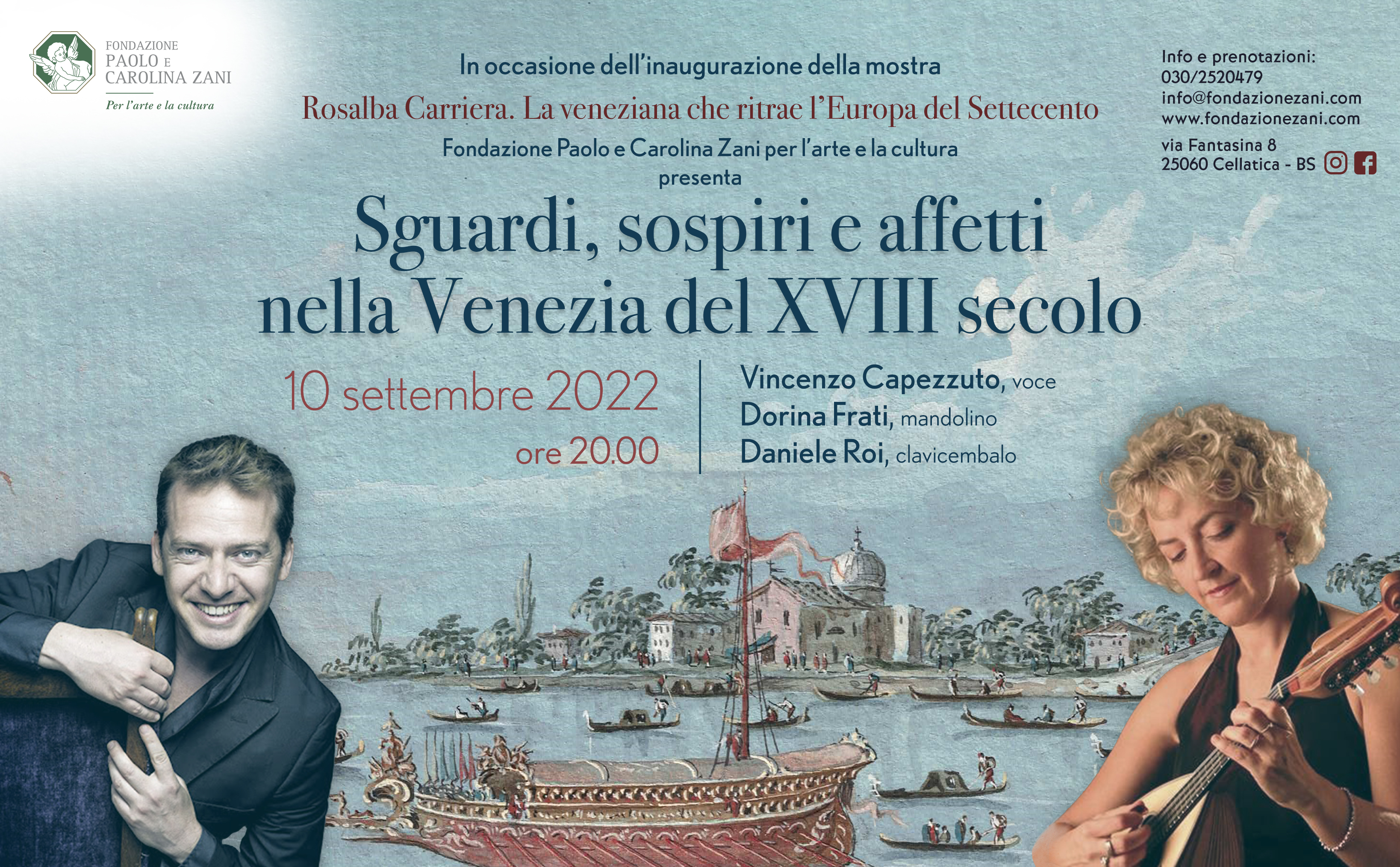 EVENT EVENING – CONCERT FOR THE OPENING OF THE EXHIBITION

An evening event that marks the opening of the temporary exhibition dedicated to Rosalba Carriera which can be visited until 8 January 2023.

The protagonists of the evening will be three interpreters of the international classical music scene: Dorina Frati, mandolin, Vincenzo Capezzuto, voice and Daniele Roi, harpsichord.

The concert is preceded by three extraordinary guided tours to the collection of the House Museum and to the temporary exhibition Rosalba Carriera. La veneziana che ritrae l’Europa del Settecento which will be held at 6:30 pm, 6:45 pm and 7:00 pm.

Dorina Frati Considered one of the greatest virtuosos of the international mandolin scene, she completed her musical studies with Maestro Giuseppe Anedda and graduated, first in Italy, at the Pollini Conservatory of Padua. The intense concert activity sees her engaged both in chamber ensembles and with the most prestigious Italian symphonic orchestras: Filarmonica della Scala and Accademia di Santa Cecilia. Invited by Maestro Riccardo Muti, she was a guest of the Wiener Philarmoniker and the Bayerischer Rundfunk Simphonieorchester of Munich. The long association with the Solisti Veneti directed by Claudio Scimone has allowed her to perform in the most important halls in the world, participating in numerous tours and festivals. She is the first mandolin of the Orchestra of the Teatro alla Scala and of the Filarmonica della Scala, with which she has been collaborating since 1987. It was conducted by Carlos Kleiber, Carlo Maria Giulini, Riccardo Muti, Lorin Maazel, Daniel Barenboim, Zubin Mehta, Antonio Pappano, Riccardo Chailly. He has recorded for Sony, Emi, Decca and Erato; with Dynamic she has been dedicated in recent years to the rediscovery of an interesting and new repertoire for mandolin. She has been the interpreter of several first absolute performances, including the piece for three acting actors and Plectrum Orchestra L’Isola dell’Amore by the Swiss composer Francesco Hoch, the latter dedicated to her. In recent years she has dedicated herself to the artistic direction of the Fuoriluogo concert review. He teaches Mandolin at the Luca Marenzio Conservatory in Brescia.

Vincenzo Capezzuto International dancer and singer, he began his artistic studies at the San Carlo Theater in Naples, quickly becoming a soloist and dancing with international companies including: San Carlo Theater in Naples, English National Ballet, Julio Bocca’s Argentine Ballet and Aterballetto di Mauro Bigonzetti and interpreting the ballets of the most important 19th and 20th century choreographers such as George Balanchine, August Bournonville, Marius Petipa, William Forsythe, Mauro Bigonzetti, Alvin Ailey, Frederick Ashton, Roland Petit and others. Awarded with prestigious prizes and awards such as the Positano – Leonide Massine award and the TOYP award for the dissemination of art in the world, he is invited to dance in numerous International Gala alongside Alessandra Ferri, Maximiliano Guerra, Manuel Legris, Julio Bocca, Roberto Bubbles and others. Vincenzo Capezzuto’s international singing career includes collaborations as a guest artist with the L’Arpeggiata ensemble directed by Christina Pluhar making recordings for the Virgin Classics / Erato label. Accompanied by Cecilia Bartoli as a guest artist, Vincenzo participated as lead singer in the recording of the album Gondola with the ensemble Il Pomo d’Oro, in which he interprets the Venetian boat arias of the eighteenth century. He is invited by the Capella Cracoviensis ensemble for the theatrical production Il Ballo delle Ingrate by Claudio Monteverdi in the role of Venus and to sing Antonio Vivaldi’s Salve Regina. He interprets the musical program Vedrò con mio delito dedicated to Antonio Vivaldi and sings the musical repertoire from Monteverdi to Bach with the Tetraktis Percussions Ensemble and Vivaldi’s Stabat Mater with the Baroque Sinfonietta Georgian Orchestra. With the International Orchestra conducted by Maestro Pavel Vernikov he interprets lieder and arias by Shubert, Vivaldi and Bach. Possessing a “voice” that escapes any kind of classification for the particularity of the timbre, for the extension and for the marked versatility in ranging between different musical genres, he has performed as a solo singer at important concert institutions such as: Carnegie Hall in New York, Wigmore Hall in London, Roman Philharmonic, BBCProms in London, Walt Disney Concert Hall in Los Angeles, Melbourne Recital Center, Ravenna Festival, International Winter Festival in Sochi, Quincena Musical in San Sebastian, Hong Kong Music Festival, Shanghai Music Festival . In 2011 he founded the Soqquadro Italiano ensemble together with Claudio Borgianni, currently one of the most innovative ensembles in the international music scene.

Daniele Roi Pianist and harpsichordist, pupil of Paul Badura Skoda and Huguette Dreyfus, has played for important festivals and concert companies in Europe, America, Japan, the Middle East, Asia and Australia. He has recorded for radio and television companies collaborating with directors such as Riccardo Chailly, Peter Maag, Alberto Zedda, and Claudio Scimone. Awarded in national and international piano and chamber music competitions, he has recorded for Erato, Fonit-Cetra, Tactus, Fonè, Dynamic, Capstone Records New York. He has collaborated with various musicians including Uto Ughi, Peter Lukas Graf, Andras Adorian, Alain Marion, Shygenori Kudo, Angelo Persichilli, Eduard Melkus, Wolfram Christ, Lucia Valentini Terrani and Jean Pierre Rampal with whom he had an 11-year partnership . In 1981 he was the harpsichordist in the performances of Vivaldi Orlando Furioso’s opera played by Marilyn Horne at the Théatre du Chatelét in Paris. He teaches main piano at the Vicenza Conservatory.

Participation is allowed only by reservation to the email address info@fondazionezani.com or by telephone at 030/2520479.