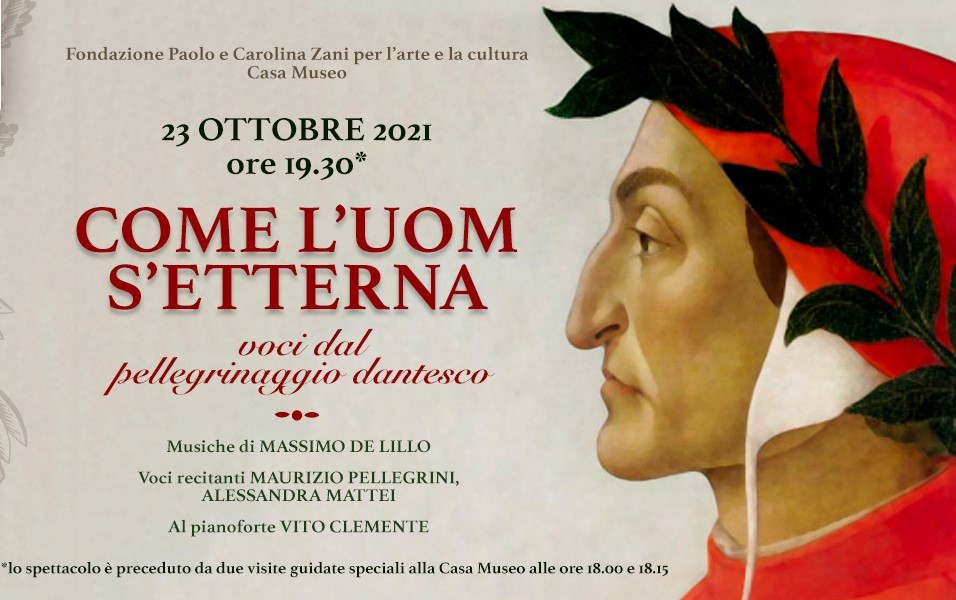 at the piano VITO CLEMENTE

Seven voices from Hell to Heaven. Dante’s journey through the non-living voice of the most significant characters from Virgil to Beatrice, from Ulysses to San Bernardo. An original concert to experience the great poet firsthand, to try to make sense of our daily wild forest in a continuous game of allegorical and philosophical references enhanced by the original music of Massimo De Lillo and interpreted by Maurizio Pellegrini, Alessandra Mattei and Vito Clemente. The most famous journey in the world from the darkness of the sorrowful city to the love that moves the sun and other stars.

The show is preceded by two guided tours to discover the extraordinary collection of the Casa Museo at 18.00 and 18.15.

To access the House Museum and the show, reservations are required by calling 0302520479 or by emailing info@fondazionezani.com

Please note that access to the House Museum and events is only allowed with a green pass or buffer carried out in the previous 48 hours.

MASSIMO DE LILLO Composer and teacher, he studied cello with Pietro Bosna and Vito Paternoster, and composition with Riccardo Santoboni, Andrea Manzoli, Pierpaolo Scattolin and Federico Biscione, graduating with full marks at the “N. Piccinni “in Bari. He also specialized in music composition for films with Luis Bacalov at the Accademia Chigiana in Siena. Winner of numerous international composition competitions, including the Classic Pure Vienna Composition Competition (2020), the Fidelio of Madrid in Spain (2020), the Bruno Serri of Modena (2018), the Elsie Bennett Composition Competition in the United States (2018) ), the Amigdala Composition Competition of Catania (2018) and the Placido Mandanici of Messina (2017), he is the author of music performed in Italy and abroad. His compositions have also been performed by the Ensemble de la Belle Musique of Singapore (2018), by the Symphony Orchestra of the Metropolitan City of Bari (2019 and 2020) and by the “N. Piccinni ”in Bari (2019). Some of his songs have been recorded for the Digression Music label by the Duo Folksongs, the musicians of the Traetta Opera Festival and the soloists of the Tokyo Academy of Music.

VITO CLEMENTE Winner of the Franco Capuana International Competition for conductors of the European Community with Puccini’s Manon Lescaut competition work, he was awarded the first prize of the Mitsubishi UFJ Trust (Japan) for the best performance of the year with Donizetti’s Maria Stuarda . With a humanistic background, he graduated with honors in Orchestral Conducting, Composition, Piano, Vocal Chamber Music, Instrumentation for Band, Choral Conducting and Choral Music, at the Niccolò Piccinni Conservatory in Bari, subsequently perfecting himself at the Accademia Chigiana and obtaining a degree in music disciplines with honors. He is artistic and musical director of the Traetta Opera Festival, of AMIFest, of the Japan Apulia Festival of Tokyo, of Tokyo Academy of Music and of Idea Press Musical Editions USA of New York. He is an international reference point for the performance of the operatic and sacred repertoire of Tommaso Traetta (1727-1779) and with Roberto Duarte he edited and published Il Cavaliere Errante, Miserere, Messa in C, Stabat Mater. He is usually guest director of the I.C.O. of the Metropolitan City of Bari and OperaSai of Tokyo. He has conducted prestigious orchestras throughout Italy (Orchestra of the Petruzzelli Theater, of the Municipal Theater of Bologna, of the Arena of Verona, the Toscanini Philharmonic) and abroad (Albania, Argentina, Brazil, Germany, Japan, Korea, Portugal, Qatar, Czech Republic, Romania, Spain, South Africa, Hungary, USA).

MAURIZIO PELLEGRINI Graduated from the Accademia dei Filodrammatici of Milan, a historic Italian theatrical institution, he studied with several teachers in prestigious European institutions. Later he graduated in opera singing at the “Nino Rota” conservatory in Monopoli. In 2009 he was part of the cast of IL BUMME, the only Italian show staged at the Eimuntas Nekrosius Youth Theater for Vilnius, European city for culture. He has supervised the direction of numerous prose and opera productions and is permanently engaged as an Acting Coach for young singers and actors. He writes for music and theater and has edited the revision of the chamber lyrics by Niccolò Van Westerhout together with Vito Clemente and Silvestro Sabatelli, published in volume by Idea Press USA, recorded on disc by Digression Music and distributed by Naxos. In 2014 he won the national prize “Riccardo Pradella” for young Italian companies with the show “Some like it … Fred!” Of which he is the author and performer together with the Chamber Swing Orchestra. He is Artistic Director of Epos Teatro, artistic consultant for the A.G.Ì.MUS and Artistic Secretary of the Traetta Opera Festival.

ALESSANDRA MATTEI Born in Brescia in 1986, after classical studies, she studied at the University of Verona and made her first theatrical experiences with G. Ferlini. In 2009 he graduated from the Accademia dei Filodrammatici in Milan and then began working as a professional. Among others he studies with K. Arutyunyan, N. Karpov, A. Humet, V. Binasco, H. Shuller, M. Proulx. He made his debut in theater directed by B. Fornasari and P. Clough. In 2010 he organized the “Perle tra le Dolomiti” Theater Festival. In 2011 he won the prize at the UNO Festival with the monologue Lettera di Bambola by B. Nativi. With S. Ferrentino at the Elfo Puccini Theater in Milan he takes part in The Accountant and the Morays by P. Corrias. In 2012 he lives in London and studies musicals at Pineapple Dance Studios. Directed by Bucci-Sgrosso, she works in Mythos and in Il Tartufo (CTB-Centro Teatrale Bresciano). Among others it is directed by R. Pradella, M. Pellegrini, F. Renda, S. Cordella, V. Vaccaro, S. Mabellini.