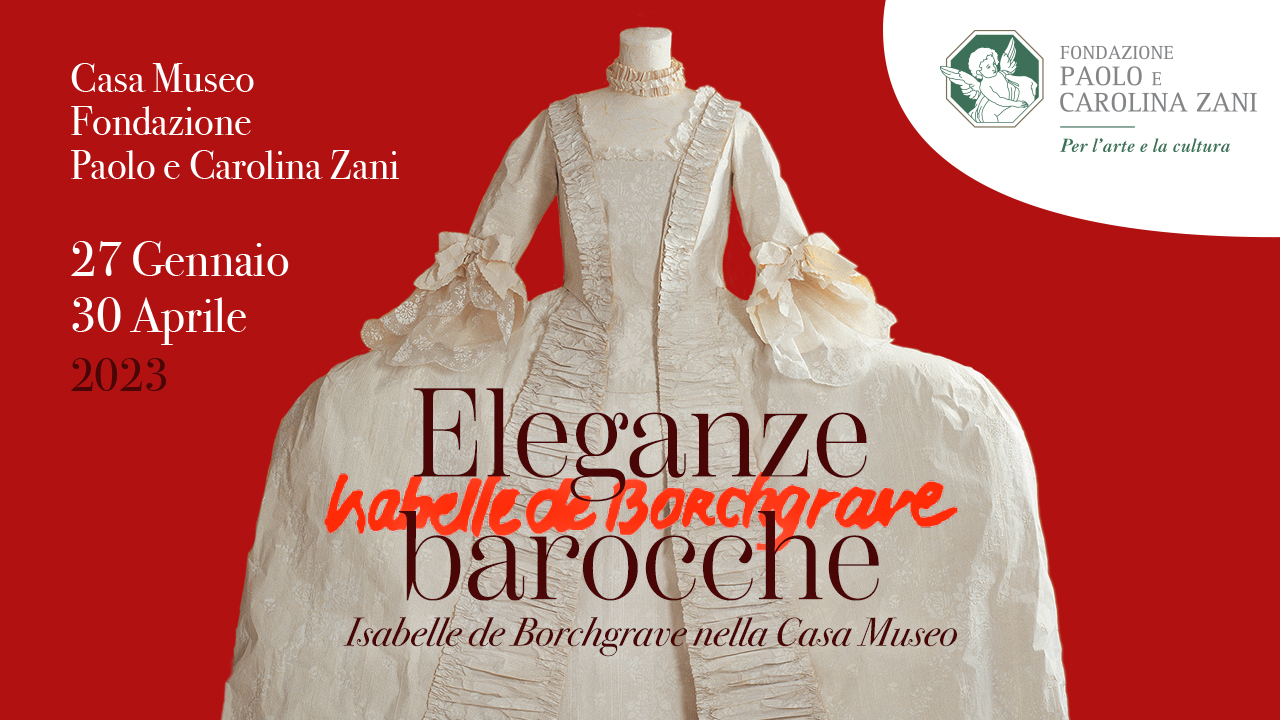 From 27 January to 30 April 2023, the House Museum of Paolo e Carolina Zani Foundation offers an exhibition inspired by the theme of art and fashion in the eighteenth century, exhibiting the spectacular creations of the artist Isabelle de Borchgrave (Brussels, 1946).

One of the most fascinating contemporary artists enters the House Museum with clothes and clothing creations that establish an ideal dialogue between art and fashion. The works of the Belgian artist are not theatrical costumes or simple reproductions of historical clothes, but authentic sculptures made entirely of paper that celebrate the elegance and style of the eighteenth century European, of which the House Museum preserves real historical and artistic excellence. The creations of Borchgrave dialogue naturally with the environments and with part of the Zani collection, so, among the clothes and fashion accessories inspired by Madame de Pompadour and Marie Antoinette, the canvases of Boucher, Canaletto, Guardi and the furnishings exhibited in the permanent path of the House Museum, a subtle liaison is established, evocative of a sumptuous and unrepeatable elegance, the one that seduced the courts of all Europe during the eighteenth century.

The five sculptural dresses on display in the museum are the result of the refined work of the Belgian artist who cuts, bends, paints, creases, creases, pleats and meticulously twisted simple sheets of paper. Moment after moment the matter is transformed between his hands, assuming the appearance of brocades, rasi, lace, lace, trine, trimmings… thus revealing a completely new soul.

Those of Borchgrave are so silent presences in paper that animate the exhibition in the evocative and out of time environments of the House Museum, in which the central themes that make up its permanent collection – Venice and France of the eighteenth century, The East, together with Baroque Rome- are proposed with a new point of view: that of an artist who has transformed the magic of paper in pure seduction.

Biography of the artist

Isabelle de Borchgrave (Isabelle Jeanne Marie Alice Jacobs, Brussels 1946) is one of the most fascinating contemporary artists, known above all for her pictorial production and for the creation of sculptural paper dresses. After training at the Centre des Arts Décoratifs and the Académie Royale des Beaux-Arts in Brussels, Borchgrave also devoted herself to advertising, fashion and interior design and, since 1994, to the creation of paper costumes for museum exhibitions. Thus, since 1998, a series of successful and legendary exhibitions have seen Borchgrave as the absolute protagonist of a particular technique that combines sculpture and trompe-l’œil, in a very original reinterpretation that links the history of fashion to art. Papiers à la Mode (Paper in Fashion) has seen her engaged in a journey of over 300 years of fashion history, with paper sculptures celebrating the evolution of the clothing style from Elizabeth I to Coco Chanel. The exhibition has been welcomed in the most important international museums, from the Boston Museum of Fine Arts to the Victoria and Albert Museum in London, from the Fortuny Museum in Venice to the Royal Museums of Fine Arts of Belgium in Brussels, from the Museum of Fine Arts in San Francisco to the Mode Natie Fashion Museum in Antwerp, to the Fashion Institute of Technology in New York, Borchgrave has dedicated entire collections (artistic productions) to extremely vast themes: from the technique of pleating by Mariano Fortuny, to the fashion of the court of I Medici, from the overwhelming season of the Ballets Russes, with a tribute to Sergej Diaghilev, Pablo Picasso and Henri Matisse, up to the recent reinterpretation of the myth of Frida Kahlo, with a monographic retrospective that saw her recreate with paper the wardrobe, jewels and furnishings of Casa Azul by the great Mexican painter.

Borchgrave’s artistic technique involves the processing of simple sheets of white paper, of different thickness, usually 1 by 1.5 meters, spread on a large table covered with linen, then painted and treated with the trompe-l’œil effect, and finally glued. The perspective effect obtained on sculptural dresses, also made in larger dimensions than real, is accentuated by a wise use of colors – tempera, pastels, colored pencils – which, as reported also by the New York Times (13 February 2011), “are inspired by his travels: the reds of the roses of Turkey, the tones of the earth from Egypt, the blues from Greece… that produce amazing effects of sparkling color, transparent and consistent”. In 1975 Isabelle Jacobs married Count Werner de Borchgrave d’Altena.

Access to the House Museum and the temporary exhibition is allowed only with guided tour by appointment: 0302520479 – info@fondazionezani.com

Entrance tickets to the Casa Museo and the temporary exhibition