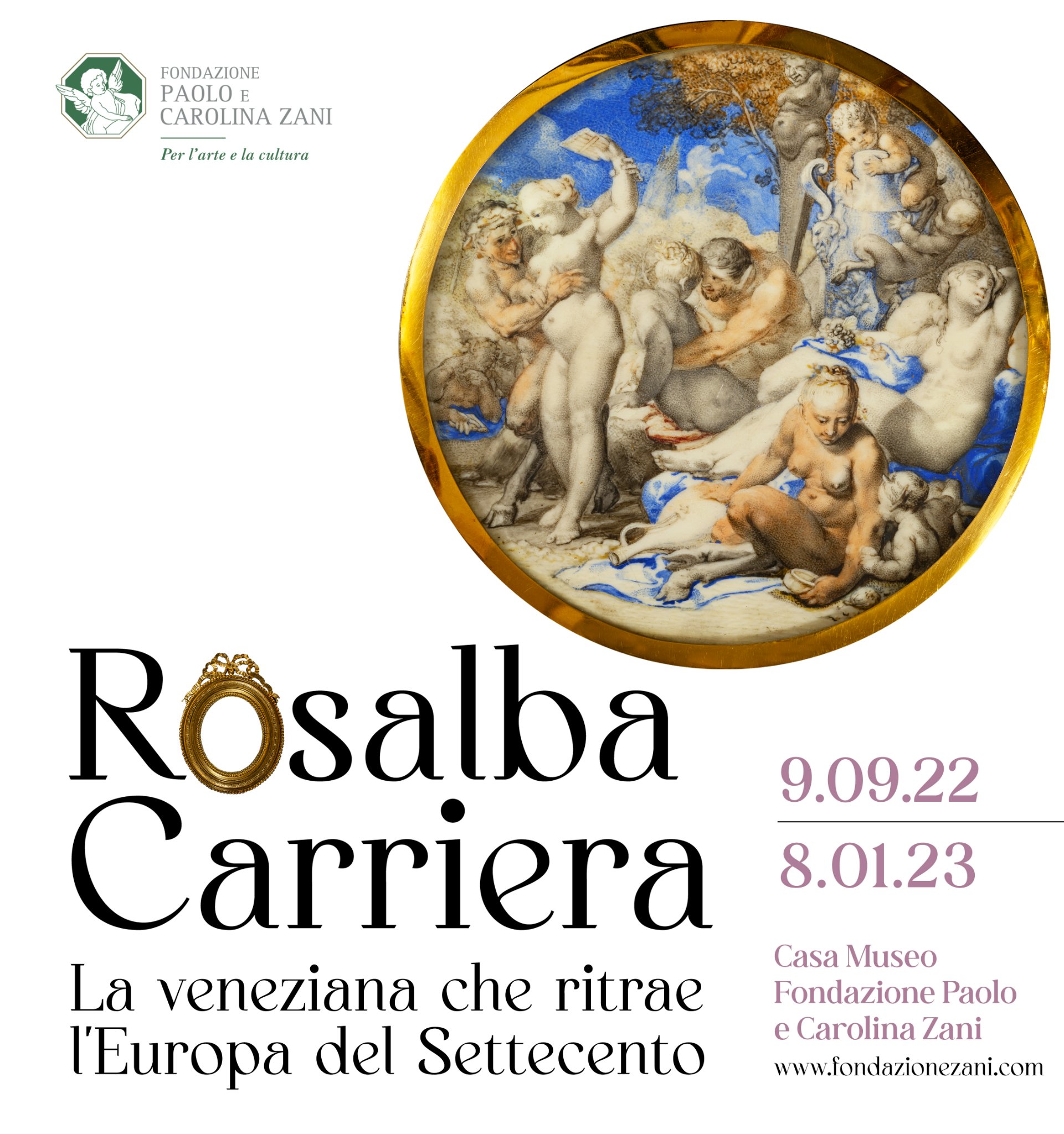 The exhibition-dossier, dedicated to one of the most fascinating figures in the history of art of all time, presents the most intimate production of what critics have defined as the “first painter of Europe”: Rosalba Carriera (Venice 1673- 1757). The protagonist of an unrepeatable artistic season, Rosalba is celebrated here through 30 miniatures painted by her between 1710 and 1730, from a private London collection, exhibited in full for the first time in the Zani House Museum. An extraordinary painter and miniaturist of Venetian origins, Rosalba is a contemporary of Canaletto, Guardi, Tiepolo and other well-documented masters in the collection of the Casa Museo Zani. The exhibition thus offers viewers an original feminine look into the artistic production of the lagoon eighteenth century, documenting an extraordinary moment in the history of art in which a Venetian painter becomes a refined and sought-after portrait interpreter at some of the most important European courts. Since the time of her apprenticeship, Rosalba has distinguished herself in the art of painting miniatures and chooses ivory as a support for the very delicate lines of her pastel, thus managing to give shine and splendor to her works. Rosalba soon turned to portraits of illustrious personalities and her fame was such that the then very young King of France Louis XV invited her to court in 1720 to portray his family. In Paris, where the Career stays for about a year, she also joins the Royal Academy of Painting, a case of a woman painter, clearly destined to remain exceptional. The Parisian period is an extremely important moment of mutual influence with the well-known Rococo painter Jean-Antoine Watteau, of whom he paints one of the most famous portraits, and of sophisticated frequentations of intellectual circles. Many are the nobles of the court of Versailles who aspire to have a portrait of him.

After staying at the courts of Modena and Vienna, however, Rosalba returned to Venice, where she set up a thriving “female” shop and, in Venice, she died in 1757, afflicted by a cruel blindness that had led her to abandon painting already in the mid-forties of the eighteenth century. On display in the Casa Museo Zani we find some portraits of gentlemen, ladies, French, English and Austrian nobles. Among them, the beautiful miniature with the effigy of Jean Baptiste Estival, a high official of the administration of the reign of Louis XIV, and those with the Anglo-Irish William Ponsonby, first Viscount Duncannon and second Earl of Bessborough, and William Murray , Marquis of Tullibardine, Scottish nobleman. Among these beautiful portraits, the one of Augustus III Elector of Saxony, King of Poland and Grand Duke of Lithuania, wrapped in a royal ermine stole, deserves a special mention. Also among the female portraits some crowned heads stand out such as Princess Grimaldi, Princess Mary and Maria Giuseppa of Austria, Archduchess of Austria, Electress of Saxony and queen consort of the Polish-Lithuanian Confederation. Rosalba’s portraits reveal a great introspective attention aimed at investigating psychological aspects of the portrayed character and the motions of the soul, but also a lenticular attention to the details of clothing and hairstyles, an expression of the taste and style of her era, as well as faithful insight into the history of fashion in the first half of the 18th century. In Rosalba’s portraits, in addition to the delicate poses of the subjects, there is a great sensitivity in reproducing the vaporous fabrics and the precious lace. The draperies of the dresses, the trimmings and the laces are always highlighted by a lively and particular light, as, for example, can be found in the small genre scene that portrays a lady with a fan and a man with a larva and a tricorn, a snapshot of the Venetian dolce vita which documents the elegance of the European aristocracy of the eighteenth century, all dressed up in the French style. Alongside the portraits, some miniatures of mythological subjects appear on display characterized by a marked idealization of the figures that allows Rosalba to reach absolute heights of grace and poetry. This is the case of the beautiful picture with Venus and Cupid in which the very white complexion of the goddess is striking, the delicate pose of the arms that surround the little Cupid in a soft oval.

Among the subjects most dear to the Career there are then the allegories. He makes many cycles of them, without however producing copies. Those dedicated to the seasons or the four elements deserve particular attention, such as the Allegory of Water on display, in which a young woman poured from an ampoule into a jug of water. The exhibition closes with a rare miniature self-portrait that also reveals Rosalba’s identity and is part of a series of self-portraits that the artist creates between his youth and old age, preserved in Venice at the Museo del Settecento in Ca ‘ Rezzonico, at the Gallerie dell’Accademia, in Dresden and in Florence. The work on display portrays her in a mature phase with her face framed by a cascade of tidy brown curls, a sharp gaze, thin lips that barely hint at an ironic smile. Also in this case Rosalba pauses to describe the details of the dress. The painter is wearing one chemise enriched with a jabot at the neck, while the lapels of the scarlet overcoat are embellished with golden thread embroidery. An almost masculine style, very unusual for a woman of the time, but perfectly representative of the eclectic and modern personality of Rosalba, the absolute protagonist of an art full of emotions and shades of the soul.

Access to the House Museum and the exhibition is allowed only with a guided tour by reservation to be made on the website www.fondazionezani.com, at the email address info@fondazionezani.com or by telephone at 030/2520479

Entrance tickets to the House Museum and to the temporary exhibition Full: